Recently, Nathaniel Cassidy of Duchess of Grange wrote a Blog entitled “Never link your social media profiles!“, which is ironic because I had in the works (AKA my head) a plan for a similar post.  Rather than “reinvent the wheel” as Nathaniel did an excellent job with his post I am going to refine mine down to a specific.  Do not have LinkedIn automatically update with your Tweets.

Simply put, because you are likely to say something on Twitter that you would not want your professional network seeing.  Now, I’ve seen examples that aren’t that bad, a certain journalist I know has the two linked and hasn’t posted anything potentially upsetting, he just occasionally goes on a massive series of Tweeting which results in my LinkedIn page being flooded out by his Tweets, sometimes causing me to miss networking information.

That isn’t that bad!

No, you’re completely right, it isn’t that bad but it’s also the lesser of the two evils.  I have captured evidence however of something that is potentially more damaging; 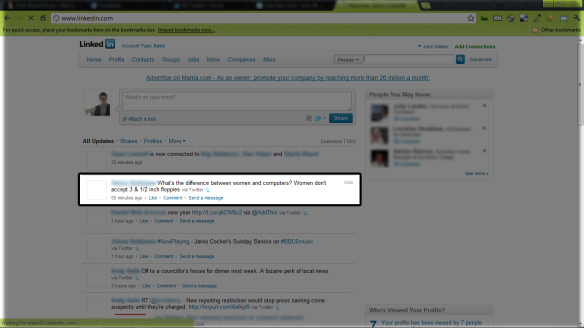 LinkedIn is a very business orientated network, imagine telling that joke in the middle of an important meeting with a new client you don’t well.  It’s got a fair chance of not being taken in good spirit.

There is a better way!

I occasionally like to post my Tweets to LinkedIn, usually something to do with a PR Release or a new blog post I think is relative to my business contacts.  If on LinkedIn you go to Settings -> Twitter Settings -> Share only tweets that contain #in it is possible to update LinkedIn by adding #in at the end of your tweets, this stops embarrassing stories or jokes from being published to your clients and potential clients.

I saw that once!

Do you have a similar story? Did one of your connections post something that you thought “That shouldn’t be on LinkedIn?” Leave a comment below!